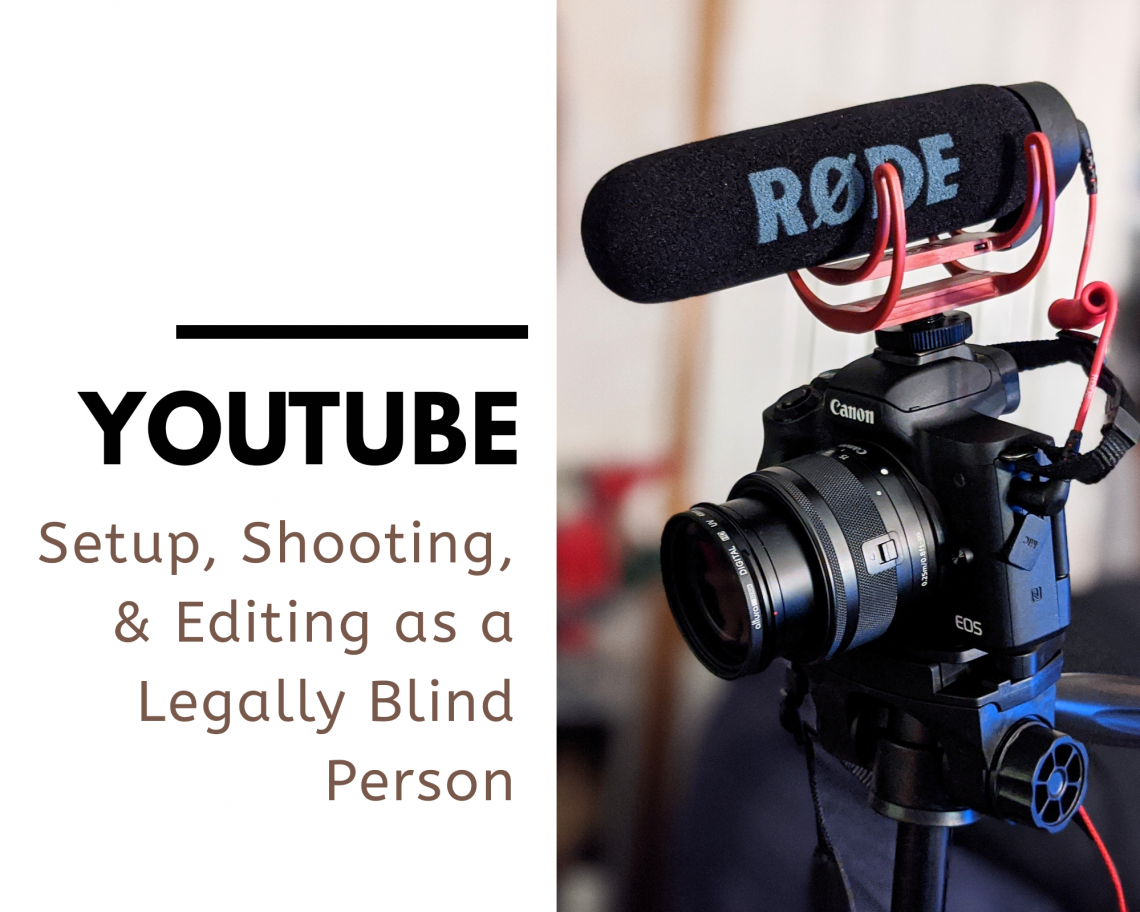 I’ve considered starting a YouTube channel for a year or two now through which I could share my life and my perspective as a person with albinism and a visual impairment. It is finally happening now in 2020 amid all of the chaos going on.

In this post, I’ll walk you through my thought process, research, equipment, learning to edit, and other aspects of an early YouTube channel along with all the ways having a visual impairment can make those things challenging.

You can find my channel here under the name Dani Marie AUC.

I’m a bit of an overdoer, meaning when I jump into a new task or challenge, I tend to go overboard with research and my thought process. This can be an excellent characteristic, but it can also lead to overthinking and procrastination. So, I gave myself a timeline.

I said, “Danielle, you have this time off. The end of May is your deadline.” Then, I put a date in my calendar. I was taking this very seriously.

I’ve been casually jotting down ideas for future videos for months now in a Google Keep note, so I had a starting point and a small reservoir of ideas to start with. Thanks to some time off due to the current Covid-19 pandemic, I figured it was now or never.

I considered the amount of time learning to film myself, talking to a camera, editing video, and any other aspects of the process would require. I think I overestimated the amount of time it would take me to get a foothold on the concepts, which happily lead to the creation of two videos in one week. For a beginner, I was very proud. I still have a long way to go, though.

Let’s talk equipment. As I said, I’m an overdoer. I have a fairly old Nikon D5200, which is a nine year old DSLR. I began experimenting with it more and doing some research to see if anyone had shot video with this thing before. My research and experience told me this camera might be a hassle when it came to video recording. Its 16 megapixel sensor was becoming a bit outdated for photos as well. So, my research continued until I found a solid solution that was affordable and easy to use. Enter the Canon M50.

I wasn’t new to cameras outside the realm of point-and-shoot. My experience was with DSLR cameras, and that experience was a bit intermittent. When I discovered the land of mirrorless cameras though, I was so excited. I couldn’t believe how much smaller and more affordable these cameras had become.

The Canon M50 came out in 2018, so it wasn’t new. The price reflected its age when I purchased it, costing me about $600 for the camera, 32GB memory card, shotgun mic, and an extra battery. A better deal could not have existed for my purposes. You can find the bundle I purchased here. I added the extra battery myself.

YouTube has no shortage of camera tutorials, so I dove into that and whatever else the internet had to offer. I was pretty familiar with the camera before I even had it in my hands. I had an idea about which settings would work for me and my uses, and I was very excited when I got my hands on it.

If you want to see just how excited I was, you can see my unboxing here on IGTV. I shot that video with my phone’s front facing camera, so sorry in advance for the position and the audio.

I own a USB interface and two cheap condenser microphones for recording my music, so I initially assumed that I would use those in my setup. I wasn’t looking forward to having an extra audio track to add in with my video as an amateur. I also didn’t want to have a mic in my face for all my videos. That wasn’t the style I was going for initially.

Enter the previously mentioned camera bundle, which included a Rode VideoMic Go. This mic is a budget shotgun microphone that connects right to the camera. It was simple and affordable, and I loved both of those things as a beginner.

Oh, lighting. The arch nemesis of photophobia. I looked into ring lights, umbrellas, softboxes, and more. I finally settled on a softbox from Amazon hoping it would be bright enough to provide good lighting without giving me a headache after ten minutes.

I ended up aiming the softbox at the ceiling and bouncing the light to provide sufficient but indirect lighting. I may never have those super bright natural videos where I’m not squinting, but my hope is that I can find some happy medium between well lit and not painfully bright.

There really is no good way to take video of yourself without a tripod. Even if you wanted to do vlog style videos, a tripod is a necessity to provide grip and stability. I originally ordered this tripod from Amazon but received a defective unit (it was replaced within a week). So, I used an old tripod of my mother’s from years and years ago. It wasn’t light or compact, but it was a working tripod. It worked out well for my first couple of videos. I’d still be using it if I were in a pinch, so I’m certainly not complaining.

The tripod I ordered worked out very well once I received my second one. It is light and includes a zippered case.

The best way to start a project really is by using what you already have until you’re comfortable with the process, but as I’ve said, I’m a bit of an overacheiver.

I think shooting video of yourself solo is challenging for anyone, but adding a visual impairment on top of that can add some new obstacles. The Canon M50 has an articulating screen that folds out and to the side. It can be aimed in front of the camera, which is an amazing feature for shooting solo, but it is a challenge to see for someone who is legally blind.

This camera also has a remote viewfinder that allows you to connect a phone via bluetooth or wifi and adjust settings and shoot photos and videos. I did attempt to use this, and I was so excited to have a newer camera with this feature. Much to my dismay, the wireless connection caused interference with my shotgun microphone. So, that feature is out for video, but it could be useful in the future for taking and transfering photos in a pinch.

A few years back, I caught Adobe Premier and Photoshop Elements 2018 on sale at Best Buy for $80-ish. Here’s a link for the 2021 version of that package.

Again, video and web tutorials are endless for Adobe products. That is how I learned to edit, and I was surprised at how quickly I picked up the basics. I watched some YouTube videos by creators I enjoyed and took the parts and styles I enjoyed so that I could incorporate that into my own project. There are fine visual elements here that can be challenging with a visual impairment, but like any program on any computer these days, they are very adaptable. You can always zoom in closer or adjust the contrast settings of the PC/Mac.

I don’t currently use a screen reader, so I can’t say how compatible that will be with these products. Adobe has been around for so many years that I’d like to assume they cooperate well, but that’s for someone else to say.

For YouTube or any social media platform, there is so much to learn about algorithms and search engine optimization. I began learning how most of these things work when I began this blog. I’ve been taking small steps to improve this website since then.

As for YouTube, I have watched several videos, done some reading, and will be experimenting in the future on the best ways to utilize keywords, titles, thumbnails, etc.

When it comes to technology, there will always be more to learn, updates, and new guidelines.

If you have a YouTube channel and it is related to Albinism, Visual Impairment, or Blindness, send me an email, and I’d be happy to add your channel link to my Helpful Sites page. You can find my contact information on my About page.

Until next time, stay curious. 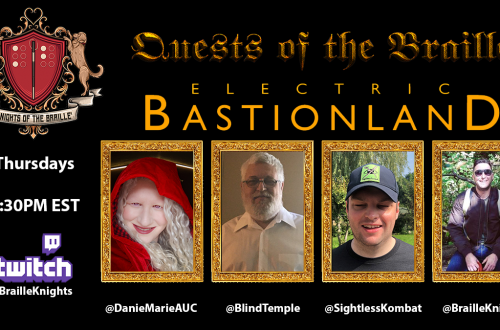 Live Streamed TableTop RPG with Blind Creators: Let’s Have Some Awareness & Some Fun 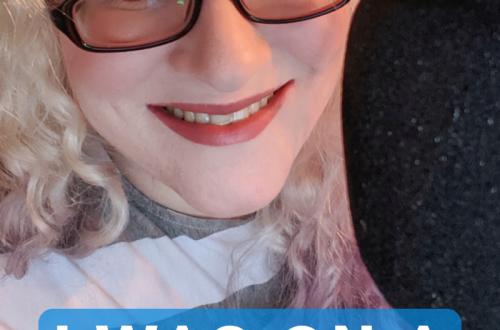