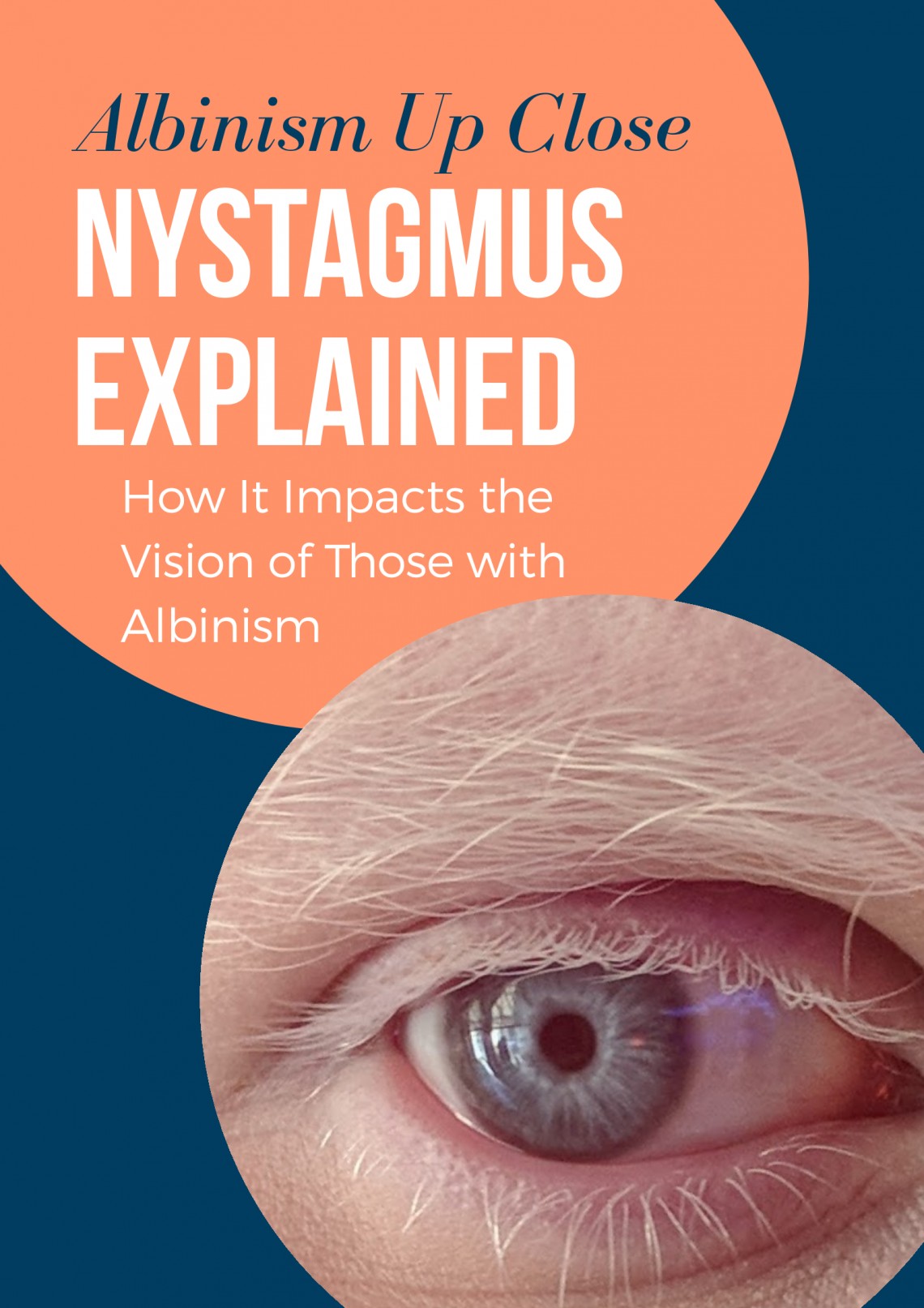 To read more about albinism, check out my article titled “Albinism: What Is It & What Do I See.“

To learn more about the other eye conditions that are part of albinism, check out my article titled “Why Can’t Glasses Fix My Vision: The Albinism Perspective.“

Nystagmus is a rapid, uncontrollable movement of the eyes. It can be vertical, horizontal, or rotary (circular), and it can vary in frequency and speed. Generally, the higher the speed, or oscillations, of nystagmus, the worse a person’s vision is expected to be.

Nystagmus can be congenital meaning a person is born with it or acquired later in life. Nystagmus in albinism is congenital. It has varying levels of severity, but it is generally recognized and diagnosed soon after birth.

Several eye conditions can be related to congenital nystagmus. Some of these include Ocular and Oculocutaneous Albinism, congenital cataracts, optic nerve hypoplasia, Leber’s congenital amaurosis, aniridia, severe refractive errors, and more. As I’ve explored the blind and visually impaired communities, I have found that so many people in those communities deal with nystagmus as well. Community is vitally important for both a sense of belonging and the broadening of perspectives.

Congenital nystagmus comes in two forms. When it is the result of an eye condition that also causes severe vision impairment, it is referred to as sensory nystagmus. It is called this because the eyes have an impaired ability to “sense” vision. It generally continues throughout a person’s entire life.

Congenital motor nystagmus occurs in children with normal or near-normal vision due to the brain’s impaired motor control of the eye muscles. This type of nystagmus is more common, but the cause isn’t always known. A diagnosis is made after ruling out sensory nystagmus and its related conditions.

Acquired nystagmus can occur due to various conditions including stroke, head trauma, inner ear issues, vitamin deficiency, certain medications, and more. It can also occur as the result of drug use, and is often considered a key identifier of alcohol or sedative intoxication.

Nystagmus symptoms can include light sensitivity, dizziness, difficulty seeing in the dark, blurry vision, a head turn or tilt, and the feeling that the world is shaking.

The most jarring of these symptoms is feeling as though the world is shaking, but this symptom only occurs in those with acquired nystagmus. The brain has a truly magnificent way of adapting to changes in sensory input including visual impairment and nystagmus. For those who are born with nystagmus, the brain compensates for the constant movements.

How Does it Affect Vision

Those with albinism can experience any combination of symptoms listed above in varying degrees of severity. The most common seems to be eye strain. The constant movement of the eyes can cause them to tire more easily especially when working on tasks that require precision work or focusing on text or screens.

Blurriness also occurs as a result of this condition. The constant shaking can lead to varying levels of blurry vision.

Nystagmus also worsens as the eyes are tired or as a person is physically tired or sick.

The null point refers to the point at which a person can look where his or her nystagmus stops or slows. If that null point is not located at the center of a person’s vision, he or she may tilt or turn the head to aim that null point more centrally.

I have an upward head tilt because my null point is slightly below center of my vision. I recently had this pointed out to me by a new optometrist, and that was the first time it really made sense on a personal level.

Congenital nystagmus cannot be cured. It can be improved by the use of glasses or contacts to improve vision. Many people with nystagmus also swear by contacts and say that they help to slow the nystagmus and reduce its appearance.

In some rare cases, surgery can be done to shift the muscles responsible for eye movement. This procedure seeks to shift a person’s null point to a more central point in his or her vision so that the head turn or tilt is reduced. This surgery does not have a significant effect on acuity.

Acquired nystagmus can be reversed if the condition that caused it is reversed.

What Can You Do to Lessen Symptoms of Nystagmus?

Many of the things you can do to lessen nystagmus symptoms will also help lessen the symptoms of eye fatigue in general.

American Academy of Ophthalmology (AAO): “What is Nystagmus“ 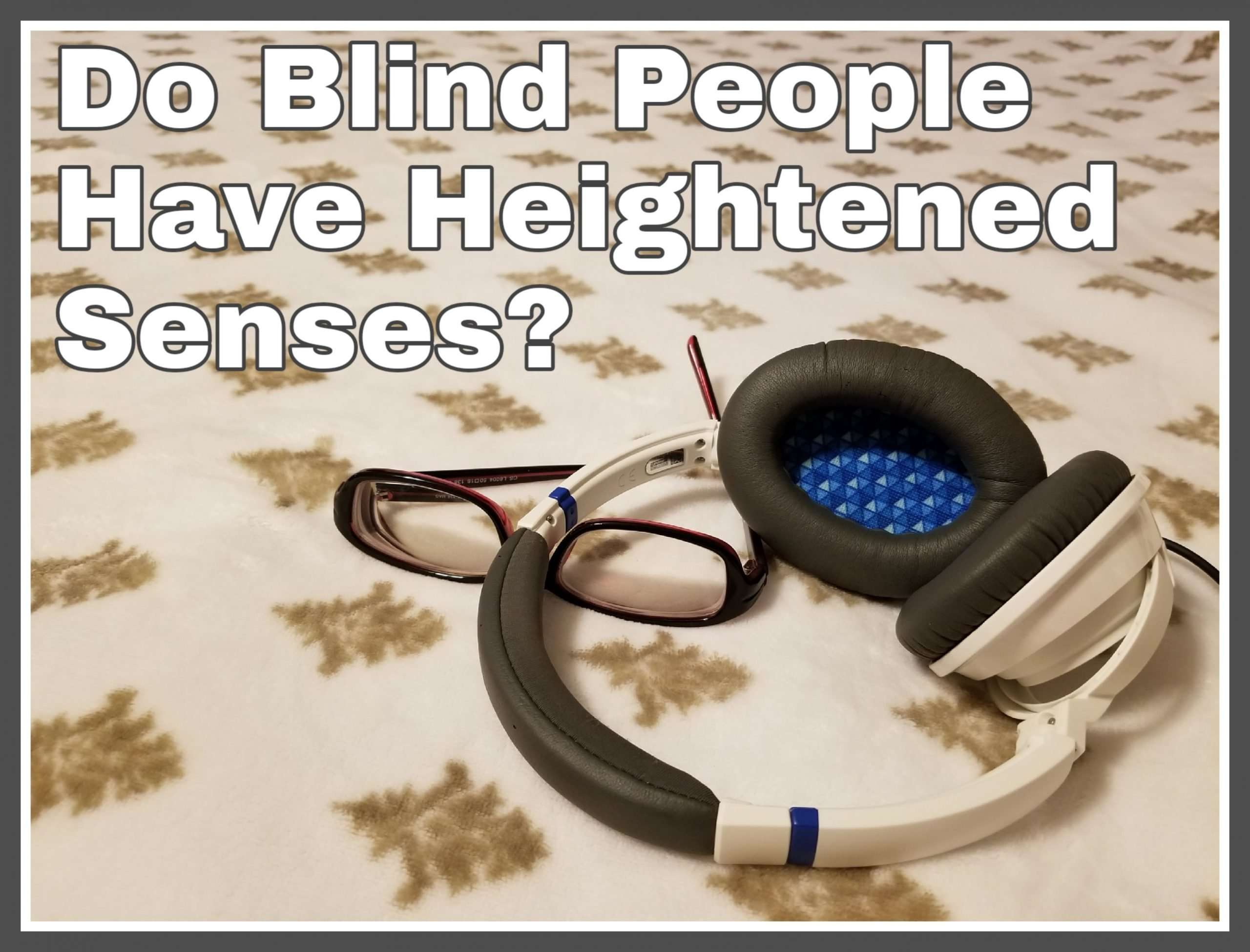 Do Blind People Have Heightened Senses? 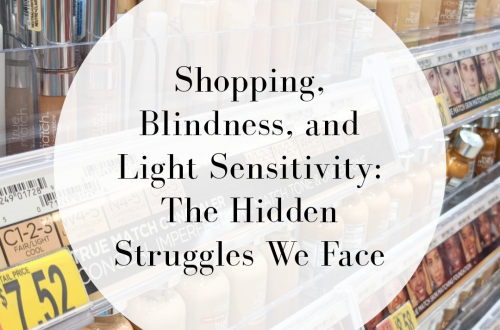 Shopping, Blindness, and Light Sensitivity: The Hidden Struggles We Face 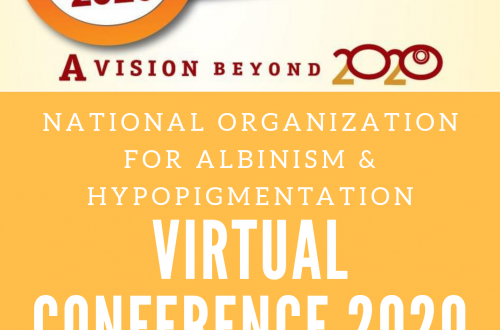